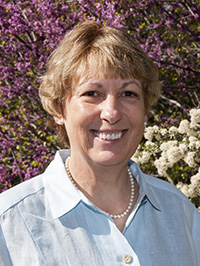 Mary E. Delany, Professor,
Department of Animal Science and Executive Associate Dean, College of Agricultural and Environmental Sciences in the University of California–Davis.

Mary Delany received her B.S. in biology from Montclair State College, graduating cum laude in 1979 and obtained her M.S. (1984) and Ph.D. (1987) degrees at Cornell University studying in the historic Poultry Science Department. Mary Delany joined the faculties of the avian sciences and animal science departments at the University of California–Davis in 1995 and therein began to more fully appreciate the importance of poultry to humankind as a global source of protein and the value of mission-oriented research and education. Her research program has focused predominately on chicken telomere biology with projects on the organization, inheritance, regulation, and stability of telomere array organization in normal, immortalized, and transformed cell systems. Current projects include analysis of the function of the telomere-telomerase pathway in the pathology and cancerous condition caused by Marek's herpes virus which affects chicken populations world-wide. A long-term interest has been the conservation of poultry genetic resources for the benefit of the research community. Delany was chair of the Department of Animal Science 2005-2009, associate dean in the University of California–Davis College of Agricultural and Environmental Sciences 2009-2012, interim dean 2012-2014, and now serves as executive associate dean since 2014. She was a member of the Poultry Science Association board of directors, chair or member of USDA competitive review panels, and reviewer of animal science departments and programs at U.S. land-grant universities. One of her greatest research highlights was participation in the multi-national team which analyzed the first draft of the chicken genome sequence. She is a Fellow of the AAAS and the Poultry Science Association.